With the growing world population, the potato has the potential to become number one when it comes to basic food. In addition to a higher nutritional value per 100 grams, the potato also has a lower environmental pressure. To produce 1 kilogram of potatoes you need 200 liters of water, while for 1 kilo of rice this amounts to 1,111 liters. Farmers must also continue to feed the world's population while the amount of available land decreases every year. You can read below how Van den Borne grows his potatoes to achieve a fully-fledged end product.

Before the growing season, all plots are mapped and soil data is collected. A soil scan is performed on each plot. A soil scan serves as the basis for a growing season with which various cultivation measures can be carried out variably. The soil conductivity, EC is measured with the soil scan. With a higher EC value, this is an indication for a heavier ground area within the plot. The lutum / clay content will therefore also be higher here. With the soil scan, the different zones within a plot are mapped, after which a maximum return can be achieved with variable applications from each zone

The growing season starts in the spring when the fields can be fertilized. Fertilizing plots takes place from February 16, the date after which it is permitted to spread slurry over plots. Slurry is a combination of solid manure and liquid manure, the urine from animal origin. On the livestock farms, the urine and solid manure are combined in special wells / cellars. Before spreading the manure, it is mixed in the cellars to combine the urine and solid manure as much as possible. Slurry contains various nutrients such as nitrogen, phosphate and potash. In addition to nutrients for the plant, slurry also contains organic matter. Organic matter has various purposes in the soil, such as improving the structure and stimulating soil life. In order not to lose the nutrients for the plant, slurry is injected into the soil. With the injection, the nutrients are directly incorporated into the soil. 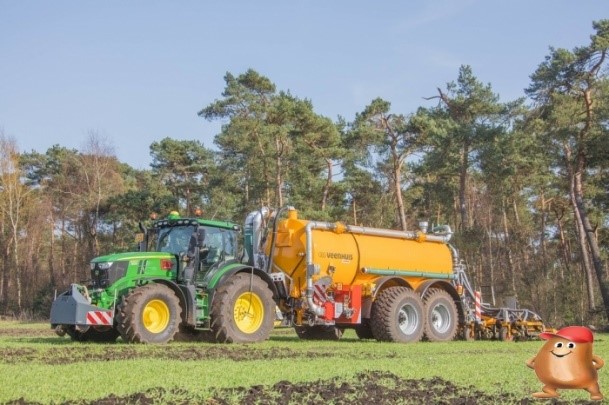 Before the potatoes can be planted, soil cultivation is carried out to prepare the land for the potatoes. The tillage can be done in several ways, with Van den Borne using 3 different ways: milling, plowing and digging. Milling, however, is not a main tillage, after plowing there will still be plowing or spading. Lots which have served as pasture or for the cultivation of a green manure in the previous cultivation season (s) are first clapped and milled. The parcels are flailed and milled in one pass, whereby the grass or green manure crop is first mowed briefly with the flail mower, after which the grass sod or green manure crop is ground using the cutter. What remains after processing are small pieces of vegetable material. In order to avoid any problems with the fine pieces of plant material during the growing season, these plots are then plowed. With the plowing of the grass plots, the small pieces of turf are buried 25 cm deep in the building furrow. During the plowing use is also made of a front packer. With the use of the packer, the plowed soil is immediately pressed down so that spraying is less possible, the moisture in the soil is retained and a beautiful seed bed is created.

Digging is done on parcels where the previous growing season had a crop, such as potatoes, corn or wheat. The digging machine loosens the soil, after which the soil is mixed with crop residues. A crumbling roller behind the spading machine ensures that the soil is pressed again to prevent atomization and the moisture is retained. With each tillage, the depth of the cultivable zone must be taken into account. The cultivable zone can differ per field and even within a field. Under the cultivable zone is soil that contains less nutrients and organic matter. When a tillage is carried out too deeply, the fertile cultivable layer is mixed with soil that is less fertile, which results in a less fertile cultivation layer.

When the tillage has been carried out and the soil has been prepared, the potatoes can be planted. The distance at which the potatoes are planted depends on a number of different factors:

Van den Borne potatoes grow different varieties in order to spread the risk and make a spread in the moment of harvesting. The varieties grown at Van den Borne are 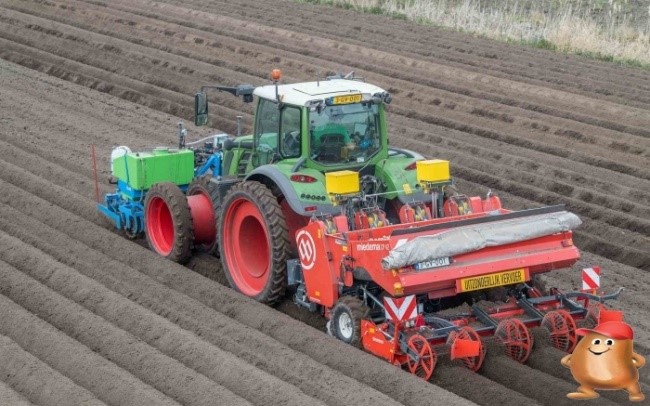 After the potatoes have been planted, it is important to keep the crop free of disease and to suppress the weeds. The most common potato blight is the fungus Phytophthora infestans. After the potatoes are planted, they are kept disease-free. A first spray against Phytophthora takes place when the potatoes are 15 cm above the ground. To protect the potato plants against the fungal disease, the spraying is carried out with the help of weather stations that determine the optimum spraying moment. At the optimum spraying moment, the disease pressure of the fungus is taken into account. The disease pressure of Phytophthora is high when the weather is humid and warm. In addition to Phytophthora, the plants are also protected against other diseases and pests:

When spraying against diseases, it is possible to distinguish between the different control methods. To protect the plants well in a period in which Phytophthora could strike, it is possible to spray preventively so that the potato plants are protected in a high disease pressure period. If the fungus has already infected the plant, it is important to kill the fungus immediately using a curative plant protection product. 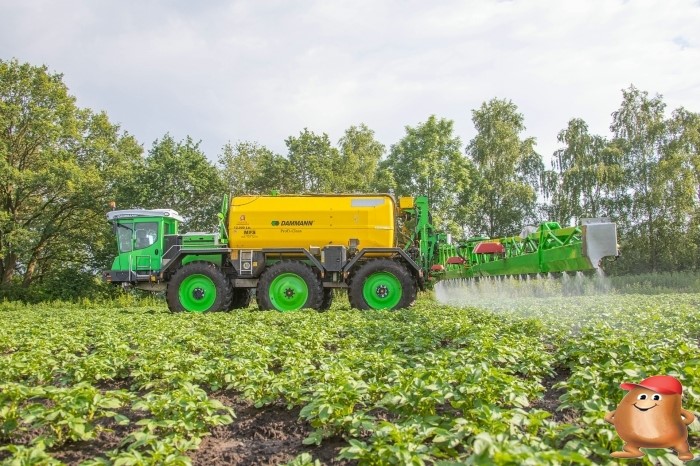 In the summer months it may happen that the potato fields have to be sprinkled. Since the sandy soil quickly loses its moisture, growth can be impeded by lack of moisture without sprinkling. The growth impediment will ultimately lead to a loss of yield, which reduces the cultivation yield. Soil moisture sensors are placed in the potato ridge to decide the optimal time of sprinkling. These sensors measure the amount of available moisture in the soil at different depths. The soil moisture sensors are linked to the Dacom advisory program in which the amount of available soil moisture can be read in graphs. When the moisture sensors indicate a too low value, a sprinkling advice is automatically issued from Dacom. The water required for sprinkling the potatoes is pumped up from groundwater wells. On average, a gift of 25mm is given per irrigation. 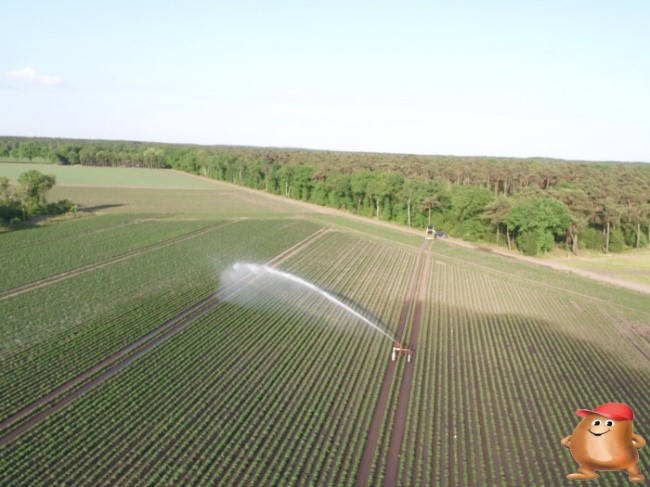 Before the potatoes can be harvested, the foliage must first die. To accelerate this process, the foliage is sprayed to death several weeks before harvesting. The potato leaves must have died for several reasons:

When the potatoes arrive on the farm, they are unloaded in a cistern, this cistern cleans sand and undersized potatoes. After this, the potatoes are transported to the shed via conveyor belts and a store loader. The different varieties are also stored in separate storage sheds. Storage means: Maintaining harvested quality for as long as possible and minimizing losses. The potato is a living organism that also breathes during storage. Low temperatures can slow that breathing and keep the potato calm. The temperature, relative humidity and CO2 concentration in the storage locations can be controlled with a view to minimal weight and quality losses. Once the potatoes have been stored, the most optimal climate for the potatoes should be pursued, in order to store the potatoes for a few months without loss of quality. The storage process consists of several stages:

Stage 1: Drying internally
The first stage is drying and obtaining a homogeneous temperature for the entire batch of potatoes. This process takes about one week with us.

Phase 3: Drying and Cooling
The third phase is cooling back and further drying (drying as far as necessary) of the batch of potatoes so that the potatoes do not germinate. If the potatoes have cooled back to 6 to 8 degrees, it is important to keep the potatoes at this temperature. This process takes until the potatoes are warmed up to be sanded out.

Stage 4: Warm up
The batches of potatoes are heated up about five days before they are taken out of the storage shed to be delivered to the customers. Warming up the potatoes is necessary because potatoes are more sensitive to damage at low temperatures.

Cultivation van den Borne:
In our storage we use the full slatted floor principle. This means that the entire floor is cooler. The floor itself consists of concrete ventilation grilles. The depth of the basement is about 60 to 120 cm. The bottom of the basement in this system is usually sloping and the distance between the slots is all the same. The fans are installed horizontally, this system is called the pressure chamber system. The air is blown into the pressure chamber and flows into the channels from there. It is important that all channels are lockable.
In addition, valves should be fitted to the bottom of the fans to turn fans on or off as needed. The advantage of this system is that the amount of air can be varied. This entire system comes from Tolsma-Grisnich. For good storage of potatoes, a capacity of 100 m3 of air per hour per m3 of potatoes is required. Usually 150 Pascal is used as back pressure.

Climate computers in the storage shed

At our company we use the climate computers of Tolsma-Grisnich storage technology. With these climate computers, all measured values ​​such as product temperature, outside temperature, relative humidity, etc. are compared with set target values ​​and preconditions. This generates electronic signals that switch the connected equipment on or off regardless of the hour of the day. It is even possible to define different programs for the different storage phases (drying, wound healing, cooling, temperature maintenance, warming up before delivery).

Ventilation may also be necessary for reasons other than temperature control. For example, to dry potatoes or to deal with local putrid fires. An automatic system does not detect such aspects. So, even with ultramodern automatic climate control, the success of storage depends largely on the vigilance and expertise of the potato grower.

In our recently built storage warehouse is the intelligent storage system Weer in Control from producer Tolsma-Grisnich. Weather in Control is an optimization program that makes ventilation and cooling decisions based on long-term weather forecasts. With this program, the control temperature of the product can be better controlled, resulting in less weight loss and lower energy consumption. This gain is achieved because the moments when cold outdoor air is available are better utilized. Weather in Control adjusts the settings of the climate computer fully automatically, whereby the outdoor air ventilation is brought forward or shifted.